It all Started with Tennis 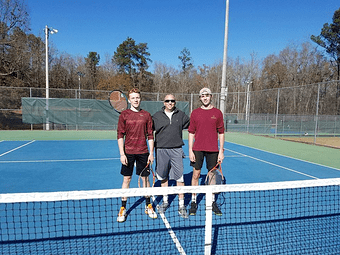 Tennis975×731 1.11 MB
Hey guys!! Isn’t this new site the absolute best?? I just wanted to hop on here and share my pickleball story. It all started when I began playing tennis with my dad. He played when he was in high school, so he began taking me once I was in about middle school. We would usually go every day after school, and I fell in love with the sport.

As I got older, I began playing tournaments and competitive high school play. I ended up placing third for our school district in the state of Georgia. This was a huge accomplishment for me! Soon after, tennis fell by the wayside as I moved out to Utah and began attending BYU. I no longer had my dad or brother to play with every day.

Fast forward to this Christmas break, I went home to visit my family for a few weeks. I was expecting many hours of tennis with my family during this short break home, however, my dad asked if I had ever tried the sport “Pickleball”. At first, I thought there was no way a sport with the name of food could be fun or even taken seriously. Boy was I wrong!! My dad and I went to the local Y in Augusta, Georgia. There we were met with about twenty other people who were all pickleball lovers. I was thrown into the fire before I even knew what a “dink” was!

As soon as I stepped onto the court it was incredible. I fell in love with the game! It reminded me of when I first started playing tennis again. Even though I had never played before, I loved taking my tennis mechanics and try to translate them into an effective pickleball strategy.

Pickleball Tournament975×650 184 KB
My dad could tell I loved the sport and the last thing he gave me before I left to come back to Utah was a brand new Z5 Onix paddle, and boy has that thing been put to use since! You can now find me usually playing twice a week on either indoor court if the weather is bad, or outdoor courts, which is my preference. So far, I have participated in two tournaments and don’t plan to stop!

I love this sport immensely and It has really taken me back to my true tennis roots. I’m grateful for everyone who has mentored me and helped me learn the game. I invite anyone and everyone to share their pickleball story!

How did you get started? I’m excited to see what people share!

Hahaha! I thought the same thing when I first heard the word Pickleball! Love your story and you are a fantastic player! It was so fun watching you and @jordan play in the last tournament.

placing third for our school district in the state of Georgia.

Some of my pickleball roots go back to tennis, I guess. But I was always so bad at tennis. It’s such a challenging sport to master. So taking a 3rd in the district is quite an accomplishment.

I thought there was no way a sport with the name of food could be fun or even taken seriously.

I think most pickleball players have thought this at least once! But so quickly do we forget how silly the name is because the experience is so unparalleled! When I’m talking with someone about the sport I always have to remind myself that they may not have that firsthand experience, like we do, about how insanely fun and addicting pickleball is. Just like you’re dad did though, we just need to get someone on the court. Let them hit a few Wiffle balls

and before you know it, they’ll be asking you what pickleball paddle to buy!

@fanningowen was a blast to play with, at the President’s Day Tournament, in Orem, UT.

I met him only a few weeks earlier during open play, before the Winter Blues Tournament. On several occasions since we met, I’ve asked him if he could meet us for early morning (5:30am) play and he lives about 30 minutes away. Every time, he’s said yes, and we have a few hours of great morning pickleball! They don’t come more dedicated than Owen! …or is it “addicted”? ¯\_(ツ)_/¯