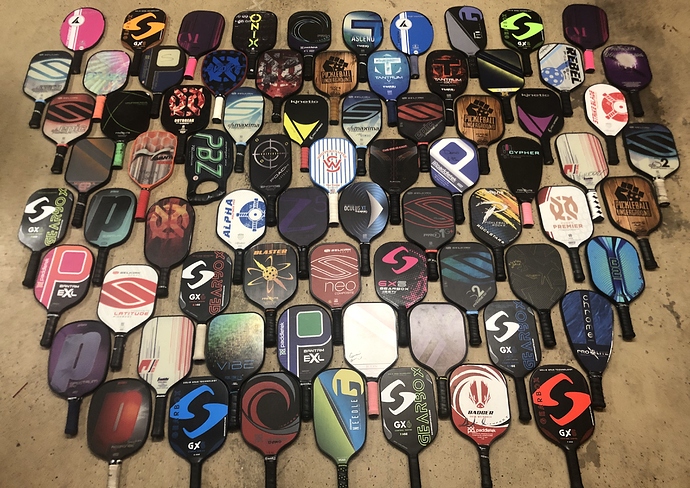 It’s true. Perhaps it’s the only truth behind the myth that is the Paddle Geek.

Super heroes don’t just spring out of the ground, or crash land here from other planets. Okay, well some do, but those are the one’s Batman and I hate. We talk on Tuesdays about it.

Summer, 2011 I was on a 3 hour treadmill run. I pretty much did this every day as I trained for my first marathon. I was 29 and had 3 kids and 1 kid on the way. I was the at home parent and the YMCA was the only way I stayed sane. I maxed out their insanely cheap “child watch” every day of the week. Running a marathon had been a dream of mine since high school and it was time to make it happen. Even if that meant treadmill long runs to do it.

One day I was interrupted from my daily dose of “Matlock” and accompanying AARP commercials by a commotion in the gym below me. It tripped one of my super powers immediately, I sensed fun. I can sense fun from… well, from as far as a normal person can hear sound. Pretty amazing I know.

I had to investigate. Maybe it was the Matlock fan in me. Coincidentally the ruckus was being caused by fit and fun seniors! They even shared my love of Matlock! It was meant to be.

Of course I loved Pickleball the very first time. If you’re reading this, you did too. I grew up playing ping pong and tennis recreationally. Pickleball combined the elements I loved from both sports and it created something greater than either of them.

My marathon training was rigorous, but I had Fridays off. Pickleball became my “dessert” after a week of hard work.

Did I mention I was a liar earlier? Well here’s where that comes in. You see I have a bit of a super power for wanting gear and buying it. Okay that’s not a super power, but that’s what I do. Well my wife doesn’t appreciate this super power as much as I wish she did you see. So as I began this new sport, I promised her I wouldn’t become obsessed and buy all the gear. I told her I’d just use the wooden paddle supplied by the Y.

Well it’s now 9 years later and at my last count I own 144 paddles. In my defense I’ve only purchased 6. Oh, then those 14 to start the pickleball program locally in Silver Bay, MN, but let’s not count those okay?? Thanks.

So that’s the first and worst lie. The next one is that I’m here to help you guys make an informed decision about pickleball paddles and equipment. Really I’m just a treasure hoarding dragon that wants all the shiny things and keeps them in his garage… I mean geek lab.

One thing is for sure and that’s that I know waaaaay too much about paddles and pickleball. If you need help deciding what ball to use, paddle to buy, or have ANY pickleball question, I’ll always don my cape and save the day. … or at least answer your question more thoroughly than anyone in the pickleball world can.

Gotta justify the paddle treasury some how. 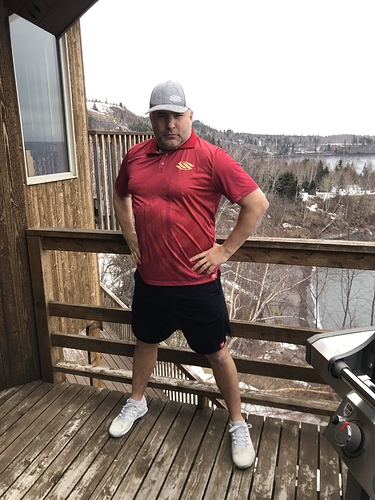 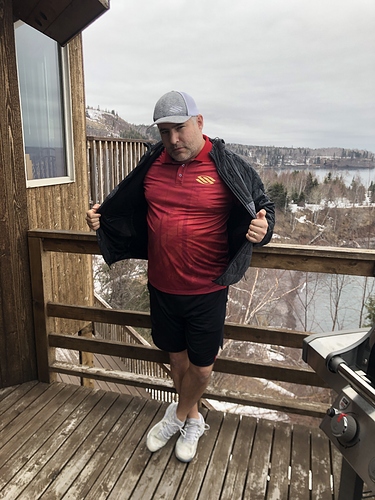 Well I wasn’t aware that I was in the presence of Pickleball royalty. I tip my hypothetical hat to you sir! In your professional opinion would you consider pickleball paddles a sound financial investment? (please say yes so I can justify more of them to my wife)

In the future they’ll be worth about as much as your 1980s baseball card collection.

I’d recommend a different tack: give your paddles to low-income children. “I gave my paddle to a kid that couldn’t afford one so I had to buy a new one.”

I’d recommend a different tack: give your paddles to low-income children. “I gave my paddle to a kid that couldn’t afford one so I had to buy a new one.”

I am novice here when it comes to paddles so I’ll rely on your expertise. I noticed in that photo that some paddle faces are longer that others. I would guess they give you more reach but sacrificing some control because it is now skinnier. Would you say that type of paddle is for a more advanced player? If I wanted to try one of those types out which would you recommend? Keep in mind I am only a month into pickleballing.

Hi Bryan! One month in. Got it.

Something to realize is there isn’t a right option for everyone. There are pro players that use both styles. Some like short handles. Others like long handles. Some play with a finger on the face. Others have their hand way at the end.

I have a tennis background and have been following former tennis players to see what they use. I just got the prince response paddle and going to give that a try. I heard it has some similarities to a tennis grip so though it would be a good paddle to transition to. Main thing is to demo and try a few out. I will let you know when I am in the market for one. Thanks.

@brandon This questions popped into my head and I wanted to ask you if you ever deconstruct paddles to physically look at materials and construction?

I guess if you are like me you treat your paddles like your baby… I’m definitely not deconstructing my baby. But maybe you’ve seen a few broken paddles and had a chance to look inside?

This is awesome so my question is what is your favorite paddle? I’m thinking selkirk since you are wearing the shirt? I loved my omni and its length and short handle but now I’m used to my new paddle.

I have. Sometimes a manufacturer will show off the innards of a paddle. Often you can learn a lot just by taking the grip off. Most paddles (with the exception of gearbox, players, and ProKennex) are sandwiches together pieces. Honeycomb core as the meat and two faces (may be various materials and layers) that are the bread.

I have a broken paddle in my Geek Lab, I’ll tear it up for you and try to put some photos in this thread.

That’s a valid question and the answer changes pretty often. When I was a Selkirk user, it was the S2 where I removed a little material to make the handle a little bigger.

I’ve used them all in tournaments. I sometimes still switch between the top 2 on this list, but that’s where it currently stands. ProKennex is doing something amazing right now that might propel that ovation back to the top. We will see.

The rogue 2 has gel core and some special carbon fiber tech. It makes for an extremely quiet and solid paddle that doesn’t transfer vibration to my hand. It’s a little head heavy and I love it for my game play style.

So many good paddles on the market! If you ever want a comparison, let me know.

Thank you so much for your input. I love elongated paddles as well I need the reach being so small. Have you ever tried engage and do you like their paddles any thoughts on them? Oh wise one

Thank you for using my honorific title.

Funny you should ask, these just came in the mail today: 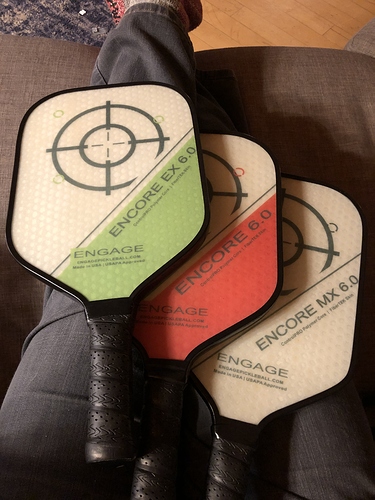 I haven’t had a ton of play time with them yet. Just when I was at the Hawaii Open for Pickleball Central and demoed them. I liked the MX model best based on the elite pro maverick shape. They’re thicker core like the amped series, but they have more power. I liked them a lot in Hawaii. The downside at first feel for me is the bigger handles on them. I might try putting a thinner grip on them. Thick core paddles are plagued by thicker handles.

My favorite engage paddle before these new ones was the Poach Icon. The encore and the elite pro models have too much power for me and the poach advantage is too soft. The icon was the Goldilocks of them. Just right. Soft poach core, fast reactive elite pro skin. Very nice paddle. Brian staub uses it. Corinne care used it when she was an engage player.

Pretty much any paddle you can name I either have it, or have used it. Can tell you the weight range and what it’s made of. It’s a little freaky.

Awesome thank you so much for the info. This is a paddle I wanted to try so all good info.

Wow!.. How have I never heard of this paddle? I had to hurry and look it up. Ended up reading everything on their website

. I like it when pickleball companies improve their equipment but I love it when it’s truly innovative and different because that is what helps push the sport forward. Hopefully you’re working on it but I’d love to hear more on your perspective of this paddle technology at some point~

Wow!.. How have I never heard of this paddle?

Probably because they only sell directly to customers. No wholesale. It’s their way of keeping the cost to consumers down, but it presents challenges in marketing. They get no help from anyone. It’s all on them. I think you’ll see them more and more if you start to look.

I even have a pickleball underground version of the rogue 2. They have a great customization program and are wonderful to work with.

How familiar are you with the Vulcan V550 Hybrid? I am looking at the Selkirk Invikta and wondering how they compare

I have not tested the Vulcan v550 extensively.

The Selkirk Invikta will play softer without a doubt.

Unless you like head heavy paddles, or are using it for singles, I’d steer you away from the Vulcan paddle.

Hahaha. That’s great. I mean I liked the title.