"All the Best Pickleball Players..."

Tell me if you’ve heard this in a lesson, video, or discussion…

“All of the professionals…”

…I don’t know about your experience with this phrase, but most of the times I’ve heard this, it’s a generalization and not an actual thing that all “pros” do universally. For example, I use a table tennis grip. There’s pros and cons, but it’s the only way I feel comfortable holding the paddle. My father plays with a racquetball grip, and it’s caused him no disadvantage.

I’ve been told time and time again the same thing:

“Use the continental grip, you can’t get better without it.”

While it is true that many and most players, including professionals, use a conventional grip, I’ve seen plenty of 4.5-5.0+ players that use different grips, including a table tennis grip like mine.

As of recently, my hand actually has gone from up at the neck of the paddle to near the middle of the handle (but still with my finger on the paddle face). However, I don’t feel like I could go to a conventional grip without a load of time and energy, and I don’t know if the transition would be more harmful than helpful.

Every serve is unique, but it has the same fundamentals in its swing. Couldn’t the same go for other shots with particular grips…?

Every swing in baseball is different, but it gets the job done in a way that suits the player who does it. Does the same not apply to pickleball…?

This issue has been roaming my mind recently, especially since I’ve been relentlessly playing Singles and due-in-part to my acquisition of my new Engage Elite Pro Maverick (a paddle with an extended handle and elongated paddle face). If any of you have any input, please let me know what your experience has been, what has worked for you, and anything else if you want to add it to the discussion.

Thanks in-advance, and hope you had a great 4th of July weekend!

Let me just start by saying I love the way your mind works @22FrenchG!

But seriously, I must agree that I’ve heard the exact same sentiment that you’ve shared here. I typically go along with an idea if someone offers compelling proof that the idea they’re sharing is a better approach than what I’m currently doing. Then comes the hard part of making a change.

It’s definitely not true that “all the pros” use a continental grip when they play pickleball. But I do watch a lot of pro pickleball videos and it does seem like a majority of them don’t have a finger on the paddle face. Right, or wrong? A majority of people are right-handed. Does that make the left-handed people wrong? Nope!

Despite what we’ve both heard, I’m not sure I still believe that one has to have a continental grip to get to the next level or top pickleball skill levels.

When I started playing pickleball last year I naturally played with my right finger up on the paddle. One of the reasons was that my paddle handle was pretty short, so it felt natural.

After a few months, I did hear from several players, who were much better than me, that I’ll only go so far with the way I was gripping the paddle… and that the only way to get to the top levels is getting out of my bad habit and using the continental pickleball grip.

I took that advice. It was a hard few weeks as I transitioned to re-wiring my brain and getting my hand to do what I wanted it to do. I’m very comfortable with it now. But you know what’s interesting… I find that on certain hits, I’m moving my hand around and sometimes I find that at the end of the point, my finger found its way back up onto the pickleball paddle! 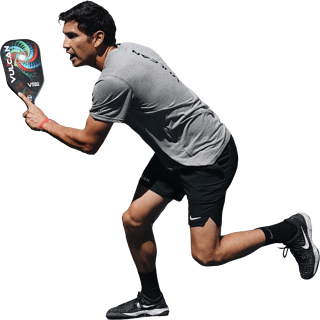 Tyler Loong - Pickleball Pro - Lefty with Unconventional grip894×895 456 KB
You have a unique situation though, @22FrenchG… You’ve been working on your singles game. I would think, logically, that if you want to level up in that type of play, that having your hand lower, may give you more reach, with the paddle.

Based on what “everyone” says… @tylerloong could never be one of the top pickleball players… he plays with his finger on the paddle! Oh my!!

I’ll work on moving my finger back to my old grip, on the paddle, if it meant I could play like Ty!

Thanks for your input, Jordan…! 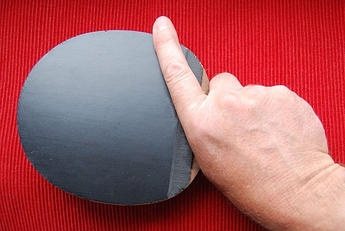 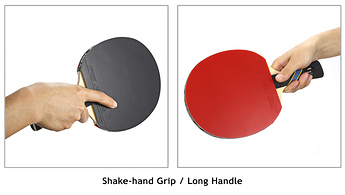 Since my hand is now further down on the handle, I get the “reach” I was missing while still being comfortable by having my finger on the paddle. I’ll take a picture and show what that looks like in just a second, but do know that I personally don’t know how you could play pickleball with a pen-hold grip. I’d actually pay to see someone serve like that… Haha!

Be right back with a picture demonstration, but thanks again for such a helpful reply!

As you can see, my finger is still on the paddle-face, so the paddle is still pointing in the same general direction it would be with my old table tennis grip, but the bottom of my hand is touching the pommel of my paddle. My hand is as far down as it can go. I actually started doing this grip accidentally, but it has worked miracles for me ever since.

For the Maverick, it’s very interesting, but it actually has given me a lot of benefits. 1.) It makes for great, precise drives; 2.) I can get some great spin from it just like I could in table tennis; 3.) I have the extended reach the Maverick provides. The new grip has improved my playing with both paddles quite a bit, but it helped with the Maverick slightly more than with the Epic.

Just to clarify, I am not “recommending” that people try this grip, and I’m not saying that it’s on-par or rivals a continental grip, but it feels the most comfortable for me while having performed with no disadvantages. If you want to try this grip out, be my guest, I just can’t promise you’ll have the same results as me.

I am guilty of this finger problem but I find in my dinking game I have more control as I push my dinks around. I was told it was a bad habit but I notice many pros that use their finger. I say always do what feels right for you. What might be unorthodox to one feels right to another. I do move it on and off my paddle. Tyler is a great example of unorthodox working so sometimes I think it’s ok to do your thing just my 2 cents.

This is what’s great about pickleball, it’s not like tennis that you have to follow very stringent rules on form to be able to play in the highest level (although some tennis players like Marion Bartoli, Fabrice Santoro etc are very unorthodox and they were able to compete in the highest levels in tennis as well). I’ve seen people like Kailee Neuteboom, who uses both hands and is able to play so consistently. I’ve also seen Jeff Warnick use that reverse forehand smash which can be sooo effective. Shellton is also a very good example with his unicorn shot.

It’s also a matter of risk and rewards. If your unorthodox style give you more rewards and helps you to move towards your goal, i think you should continue using it. If it limits your potential, obviously you’ve got to adapt and change some aspect of it or use it more sparingly. 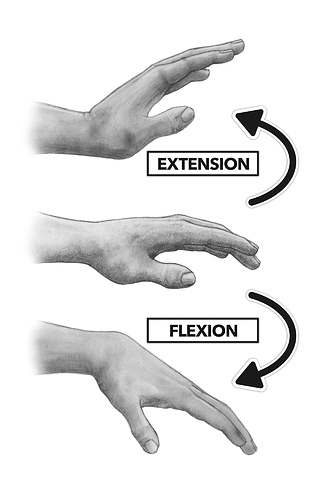 Good info. Ty and I totally agree with all you stated. Have you heard that it’s bad for your finger? Megan Butler told me a doctor that plays said it damages your finger and you’ll have to have surgery when you are older if you don’t break the habit I was curious if you had heard anything like this?

It won’t hurt your finger, but she is right that it limits your wrist movement up and down. That especially becomes prevalent when you try a slam with a “finger-on” grip. I’ve managed to work around it by using a table tennis “forehand slam,” which involves attacking the ball from your upper-right side instead of directly above your head. I can’t find a picture to demonstrate, but if you imagine a 3x3 tic-tac-toe box, you’re striking the ball in the top-right corner (for right-handed players) rather than the top-middle corner. I do sometimes do normal slams though, just depends on the position I’m in at that moment. None have “limited” me really, because I’ve just found a way around these problems that doesn’t sacrifice any area of my game really. A lot of this sounds confusing, but if I compete someday, I’ll have someone record so you can see.

I don’t know if that’s true or not. I don’t think there is any published research about this. Biomechanically I don’t think it’s gonna cause more wear and tear than wrapping it around the paddle. It’s totally plausible that it may cause post-traumatic arthritis because your index finger is more exposed in being hit by the ball but I think I hit and cut my middle finger and ring finger more than my index finger playing pickleball. I’d be interested to hear that doctor’s rationale about it.

My finger does get hit sometimes, but it only stings for 5-seconds and that’s it. The only extension issue I could see happening with any pickleball grip would be hitting too wristy (which could cause issues with carpal-tunnels) only if done to an extreme, and having some intense pressure while your wrist is bent backwards (which I could only see happening in pickleball if you landed improperly on your hand, not through any paddle contact).