Pickleball, my story and how it is a perfect template for life and progression!

I have been thinking about how to share my story with pickleball for the past few weeks. Reading @jordan’s story helped motivate me to get on and finally write down how I got into pickleball. So…here is my story.

I grew up playing soccer and baseball until the age of 12. My mom made me choose between the two sports. So, I chose soccer. During this path I would never practice outside of the time with the team and I really struggled with focusing on the actual skills that I needed in order to progress.

I barely made it onto the Varsity soccer team in high school as a Senior because I was really fast after three years of making JV, but never getting the opportunity to play Varsity. My reaction to struggle was always to shy away and find other ways to cover up the fact that I had lack of skill. I learned though during my Senior year on the Varsity team the concept of “take a bite of the apple”. 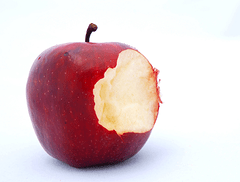 apple bite839×639 449 KB
This was a philosophy that everyone has a part and if we do our part we are capable of achieving the goals that we want to accomplish. This was the first time I learned that if I put my mind to something and actually go through the sacrifice of struggle and do my part I can achieve something. Without this concept, I would not be where I am today in work, family, and sports.

I then went on to run college track at Southern Utah University. I ran the 200m, 400m and 4x400 races. I walked on to the team and began working out and “taking a bite of the apple” I ended up being asked to run in the meets and travel with the team. This was another moment that built my foundation that the more I put myself out there and struggle through progression I was going to accomplish goals. I got asked to run the 4x400 race in the regional meet and was on cloud 9. I was successful, not the fastest, but I was progressing.

After I served a mission for the Church of Jesus Christ of Latter-day Saints I was asked by my friend Blaine to help start a soccer club and be in charge of the 5-11 year-old players. I was super excited about this because of the opportunity to really make an impact and create something greater than myself.

I started with 2 teams and ended up helping the club to grow to over 40 teams before I had to stop. I learned during this time the concept of focusing on one small skill at a time and that progression is a long-term process. I remember a particular kid who was on the low end of the team and wasn’t getting much playing time. He came up to me on his own and asked me, “coach, what do I need to do to get better.” I told him I would create a program for him. It started with a foundational work and built up from the basic skills of juggling. What he did was focus on the most difficult foundational skill. He took that to heart and did it daily. 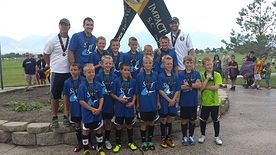 Soccer1632×918 226 KB
He slowly progressed over the next few months and became one of the top players on the team and is currently playing for his high school team in a very competitive market. I learned that when you focus on the things you don’t want to focus on you can progress faster. Even if it is difficult, boring, or makes you lose in the moment, it is part of a long-term focus that will allow you to actually change and become someone, something better.

I remember May or so of 2016 being invited 9 times to come play the sport of pickleball. I had made excuse after excuse to this individual and finally after 9 times of being invited I told my wife that I was going to go play this sport called pickleball. I showed up, borrowed a paddle and started playing.

Pickleball photo 32048×1365 265 KB
Man, I didn’t know what this sport was going to do to me, but I knew that it was something special right off the bat. As a sports fanatic and competitive person I found super quickly that even though I didn’t have any hand-eye coordination, I could still compete. I was hooked.

I went out the next day and bought the Onix Z5 and began playing 3-4 days a week. My wife always jokes that whenever I do something I do it 100%. This was definitely the case. Before I knew it I was playing 6 days a week and was meeting so many new people who cared about my well-being and were willing to help. This was unlike any sport I had ever played. I could show up and find people to play.

I remember sitting down early on and seeing the 2016 Mens 5.0 pickleball championship game and said "I am going to get to the 5.0 level. Here is that video:

After I saw that I began on this journey that has led me to so much self-discovery, so much struggle, and so many different friendships that I will have for a long long time. I remember seeing the 5.0 group playing a few courts away. I would watch as Zane Affleck, Randy Zbinden, Chad Williams, Dave Glendenning, Eric Gubler, Mason Ford and so many others would play and I would pick up one piece of what someone was doing and then would work tirelessly on trying that skill over and over and over again.

I would lose again and again and again to people I knew I could beat. I remember crying, getting pissed, wanting to give up, feeling like I would never get to that level. Then some of those 5.0’s started to recognize my work ethic and that I was trying.

Eric Gubler, Dave Glendenning, and Rob Davidson were the three that really gave me attention and technique training at the beginning. I would treasure the moments that I would get when I got on the court with these Pro players. Then I would again take the one thing they told me to do and go work on it like crazy among the 4.0 and eventually 4.5 players.

After 3 years of this process, I started to get invited to play once every month or so to the 5.0 group. That was when Randy Zbinden took me under his wing. He would share with me the small details. The strategies that 5.0 players used and would help me focus on the basic fundamentals of winning. He showed me that I could be at that level.

I will be forever grateful for this process that I went through because of what it did for me outside the court. These individuals were sent by my higher power, to my life, because I was going through something outside of pickleball that no one knew, that required me to learn step by step progression and progress.

Early on I had the goal of being sponsored. So I worked super hard to become a person that would be wanted in the pickleball world by a sponsor. I set my sight on Onix Pickleball. I loved their Z5 and had a friend who was sponsored by them.

After my first tournament at the Fall Brawl, I was introduced to Bryon Freso. From the introduction and support from my friend Byron wanted me to share my story about how I got into pickleball and why I wanted to be part of Onix.After the email I waited for two agonizing months while I kept working on my skill. I finally found out that I was going to be a sponsored player.

All I know is that I had achieved another goal. I was going to be a sponsored athlete. One of my dreams came true. I am forever grateful to Onix Pickleball because they are part of the foundation that allowed me to jump into this sport the way I did. 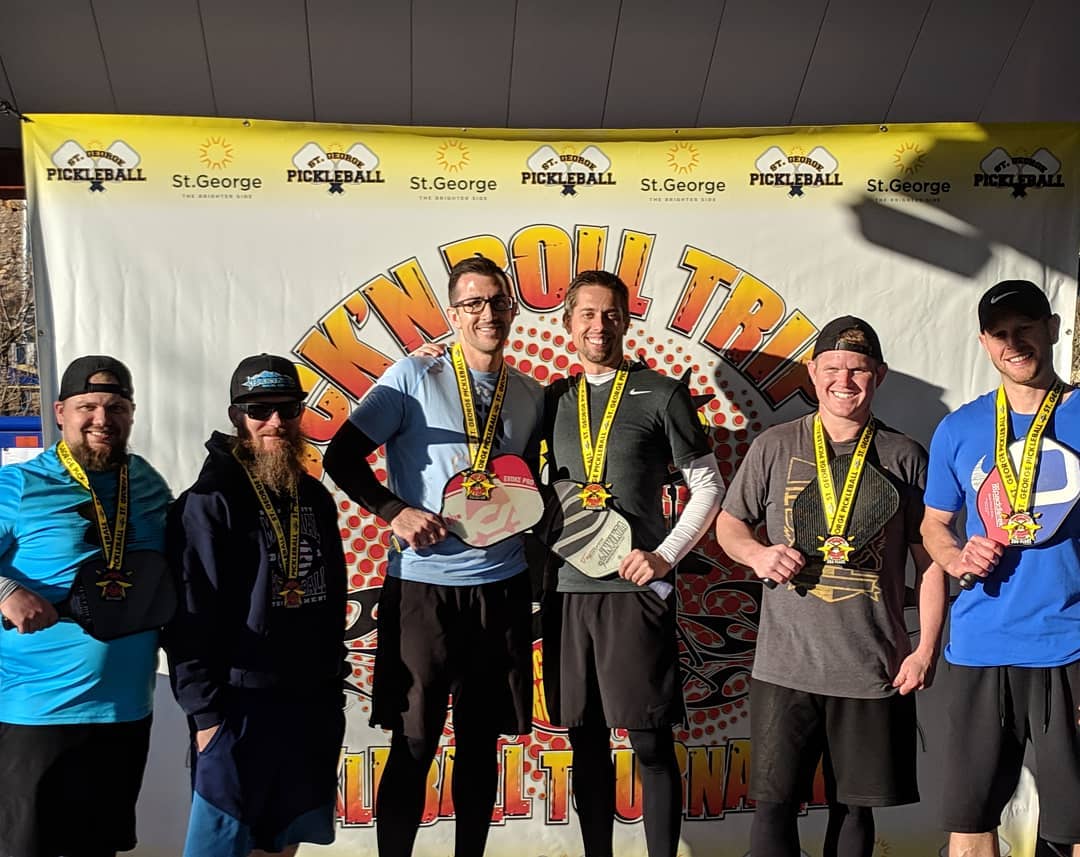 Pickleball is a template for life

How many times do we focus on an end goal in life, but we don’t focus on how to get there?

Many times we want to accomplish something, but find out after we start that it will take painstakingly long processes. I learned that it is worth it in pickleball and am applying it to life.

Pickleball is a unique sport that led me to understand progression in a safe place that didn’t have many consequences because of the people that are there. They care about you and want you to succeed. I gained the confidence to share my story with others. 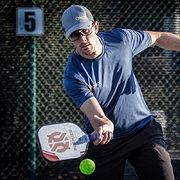 I took on responsibilities in my church that I would never have accepted prior to playing pickleball.

I finally ended up where I am consistently playing with the best players in the world. Am I at their level? NO! but I am able to compete and play with them and challenge them. Will I get to their level? That is the plan.

I officially made it to the 5.0 level and I love looking back on the challenges that led me to get here.

I am not traditionally trained in tennis, ping pong, or badminton.

I have had to struggle, recommit, challenge myself, and be ok with losing in order to accomplish a higher level goal.

Without pickleball, I don’t believe I would be working the jobs that I have now. I would not be as good of a spouse, father, friend, co-worker. I learned how to deal with negative interactions in a safe place with people who genuinely care about me and have made life long friends.

This sport changed me to be someone who has a passion for life and sees the potential of reaching for my goals and that it is possible.

I became someone who is willing to sacrifice the current wants in order to achieve the end goal. That only started when I got introduced to pickleball and learned in the environment that is…

What an inspirational story. Keep at it!

You are awesome Phil. Good read. I feel the same it’s brought out all the good in me. I love the people & the sport. Thanks for always being so vulnerable & sharing.

Such a great story @PickleballPhil.

My wife always jokes that whenever I do something I do it 100%. This was definitely the case.

My wife has said the same about me.

I know there are the little things I need to get better at but it is so hard to focus on the skill and forget about the game outcome at times.

I have seen your name around and would like to say hi in person sometime. Just like you pickleball has gotten me to do more things, especially socially, that I am not as comfortable doing.

I would love to connect with you sometime for sure! When all this Coronavirus stuff is taken care of!

Cool post, enjoyed reading it, and congrats on achieving your 5.0 goal, hope to see you play at some tourneys once we get back to some semblance of normal. good luck, and enjoy.

@Brainsdoc thank you! My story has been one that has taken forever, but had been made by so many incredible people. @tylerloong @suzeeanderson13 have been two who have really helped me at times.

I started playing in September last year after some Crossfit related elbow injuries wouldn’t allow me to keep playing squash, and been playing regularly since, really enjoying it. Played my first tournament in November. It’s really fun to make progress, and play with better and better players, have really appreciated the guidance and patience from so many great players in south florida, feel very fortunate. While still really competitive, I’ve found PB a really welcoming community. Miss playing regularly and playing tourneys.