Pickleball rule about a double-hit or a carry

What’s the rule for double hits? I’ve heard as long as it is one motion it works. Is that the official rule? I have loads of other questions in regards to the rules. Just warning you all this will be the first of many pickleball-rules posts. Also, can you call it on an opponent or is it something you have to fess up to?

11.A. Double Hits. Balls can be hit twice, but this must occur during an unintentional, continuous, single-direction stroke, by one player. If the stroke is deliberate, or not continuous or not in a single direction, or the ball is struck by a second player, it is a fault.

Only applies to double hits and not to a carry. A carry of any kind is a fault.

Stan, Thanks for looking that up for me. I need to get a physical copy of a rulebook. Also, how is referee training going?

I just finished taking the player test (96%) and the referee test (93%) on the USAPA site for referee tools just to get a baseline. Now I need lots of practice. The more I practice the more natural it will be. I am sure my first few matches are going to be rough but little by little it will get better. Thanks for asking.

I took the player test (50%) and decided I would wait to take the referee test (TBD). I figured I would read up on the rules and other technical parts of play before I take the other tests. I am finding there is a lot more to the game than I originally thought.

@bryan, this is really a great question. Probably one of the questions I hear the most on the court, from new pickleball players. I feel like there’s no other sport where a double-hit is okay. But I love that in pickleball, it IS okay b/c it’s saved me many a time

Only applies to double hits and not to a carry. A carry of any kind is a fault.

Can you elaborate and provide a clear definition for what a “carry” is, in pickleball?

The tool is really convenient at helping you “search” for rules and also provide links to others when you are referencing any of the rules from the official USAPA/IFP pickleball rules. Check it out, and let me know what you think!

Here is a video on Facebook by @donstanley7189 explaining a double hit and carry. It is explained clearly. 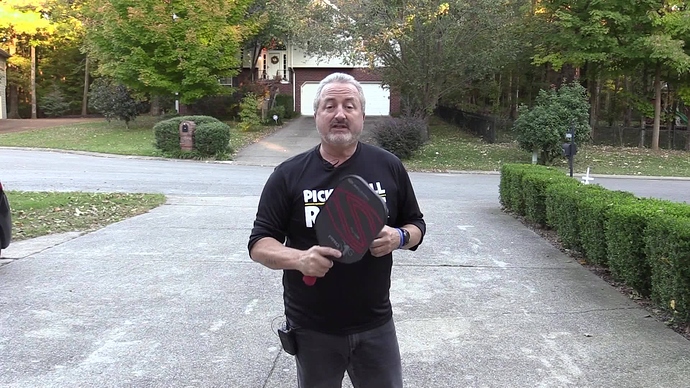 Rule 11.A Carry and Double Hits. Balls can be hit twice or carried, but this must occur during a continuous, single- direction stroke. If the stroke is not continuous or not in a single direction,...

That’s a great video. Thanks for sharing, @smcshinsky

In that thread it looks like Don also mentioned Rule 3.A.1. which defines what a “carry” is, in pickleball…

Hitting the ball in such a way that it does not bounce away from the paddle but tends to be carried along on the face of the paddle.

I wonder if @donstanley7189 could clarify something here…

In that video Don shared, it seems to imply that it’s considered a carry if you “catch” the ball, with a backward motion and then carry it into a forward motion.

I appreciate Don’s additional sentiment from that Facebook thread, here:

In My Opinion, I strongly believe that the addition of the rule for carries and double hits was put there to allow for the these accidental and unintentional types of hits that happen out of the basic nechanics of the game. I DON"T believe the intent of the rule is there for players to use as a protective covering so they can “practice finess shots” or exploit the usage of the rule by being “just outside the narrow definition” of the words used in the rule. Again, my opinion.

A carry of any kind is a fault.

I’m wondering about this statement @smcshinsky

I don’t see that anywhere in the official USAPA rulebook. Does that come from the ref book?

The official pickleball rulebook defines the word “carry” but I can’t find any other reference to a carry, within the rules.

I also just noticed that there’s a great case-in-point that was brought up by Shonda in that Facebook thread:

Watch the point at 14:40… there are a couple of lobs from @roweda and his partner, where Zane Affleck seems to perform a carry.
https://www.facebook.com/mofiapickleballLLC/videos/433376993857280/

It’s hard to tell if this is illegal, if legal or illegal is defined by “one-motion.”

i.e., A pickleball serve is rarely ever in a perfect linear/straight motion. It usually follows some kind of scoop or underhanded arc motion.

In that video Shonda shared, Zane Affleck doesn’t come back with the ball and carry it over (as outlined in Don’s video example), but it does seem like a scoop where the ball maintains contact with the face of the ball for longer than it would during a typical “hit.”

I am sure @donstanley7189 could clarify things better but the way I see it is that one if you try on purpose to scoop it with one forward motion then it is a fault. A carry is defined as being carried along the face of the paddle. It does not say that one type is ok and another is not. I think the double hit rule explains that if it is unintentional then you are still ok. Maybe there is still more room for interpretation and clarification.