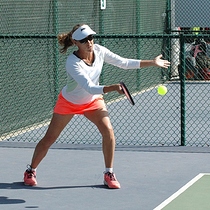 What is Pickleball - Jennifer Lucore playing pickleball1080×1080 297 KB
Pickleball is a sport. It is the fastest-growing-sport and pickleball is played all over the world. If you are new to it, WELCOME to the FUN!

Pickleball was created in the Summer of 1965 on Bainbridge Island, Washington, just off the coast from Seattle. Did you know that? Most players new to the sport can’t believe it has been around that long, for they “wish they had learned about it sooner because it is so darn FUN and good for you!”

Pickleball is a paddle sport created for all ages and skill levels. Play with two (singles play) or four players (doubles) use solid paddles to hit a perforated polymer (plastic) ball with 26-40 round holes over a net. The game is easy to learn and can quickly develop into a quick, fast-paced, competitive game for experienced, athletic players. A fun sport that combines many elements of tennis, badminton, and ping-pong. One of the biggest reasons it is also so popular is because the sport is inexpensive, very social and the more you play the healthy you can are - fact!

Pickleball can be played both indoors or outdoors on a badminton-sized court and a slightly modified tennis net. Played as doubles or singles.

Here’s a great video, put out by https://playpickleball.com, which gives a quick look at the exciting sport of pickleball:

Pickleball is a Game for Everyone

According to USAPA.org, there are over 15,000 indoor and outdoor courts in the United States.

Pickleball is being introduced to children in their physical education classes throughout the world and at elementary, middle, high school levels and colleges. And though the sport has become more competitive through the years, many players enjoy the social aspects of the game and the ability to stay active in their own towns and communities. As more retirement locations have adopted pickleball as an integrated sports activity for their population of residents, we have seen an explosion of new court construction throughout the United States – especially in the southern states. Tennis, racquetball and ping pong players love the competitive nature of the sport and regularly participate in local, regional, and national tournaments.

How to Play Pickleball

Here’s another great video from https://www.playpickleball.com/how-to-play which clearly explains the rules and gives a visual illustration of how to play pickleball.

The USAPA website is a great resource to find out where you can play pickleball. With over 1,900+ ambassadors and more than 40,000 USAPA members, these volunteers help update the Official USAPA Places 2 Play website about courts in their area. As of December 2019, they have tracked 7,928 known pickleball locations with an average of approximately 111 new locations added each month.

Places near you - Check out the Official USAPA Places 2 Play website to find the courts nearest to your location and along your travels. Use the provided Search box to search by city, state, zip code, or location name. You can also search geographically by clicking the Map link. The great thing about this resource is that it is updated regularly and does have an app for use on your mobile device for quick locations around the world. The app requires iOS 10.3 or later and is compatible with iPhone, Ipad, and iPod touch.
https://www.places2play.org/

#2 Grab a Paddle and a Ball

A Brief History of Pickleball

2020 is the 55th anniversary of pickleball … do I hear a HAPPY BIRTHDAY PICKLEBALL?

Pickleball was invented in 1965 on Bainbridge Island, a short ferry ride from Seattle, Washington. Three dads – Joel Pritchard, Bill Bell, and Barney McCallum — whose kids were bored with their usual summertime activities — are credited for creating the game. Pickleball has evolved from original handmade equipment and one page of rules into a popular sport throughout the world. Pickleball in the United States has been in the news as “the fasted growing sport” for a few years now and the game continues to grow internationally as well, with many European and Asian countries adding courts monthly. Read the complete history of pickleball.

The Origins of Pickleball, How it all began 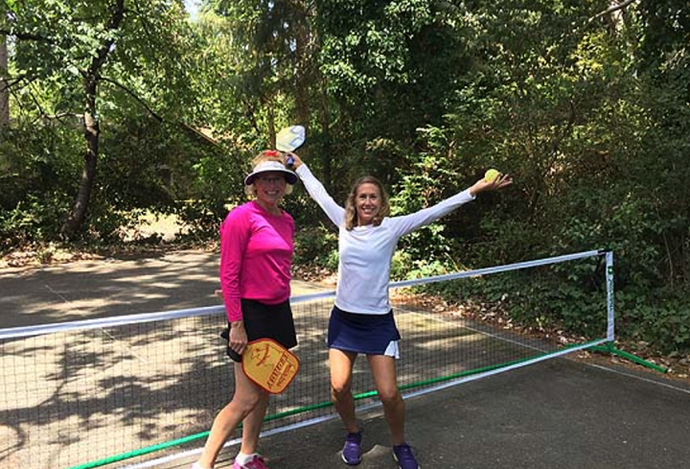 Why is it called “Pickleball?"

Pickleball has a very interesting name, especially since no pickles are used. Accounts of how the name originated differ.

According to Barney McCallum (one of the three founders), the game was officially named after the Pritchards’ dog Pickles, who would chase the ball during a pickleball game and then run off with it. As shared in its own chapter - The Name, from the book History of Pickleball - More Than 50 Years of Fun! the summer of 1965 brought the creation of the family sport and the naming of the game. Three couples wherein the Pritchards cabins front room and they were throwing around names for this sport everyone was enjoying. Joan Pritchard said “Why don’t you call it pickleball?” and they all agreed that was a great name.

The reason there is an entire chapter on The Name is … read it to learn more and be entertained! In the meantime, here’s a bit of a teaser:

A pickleball court is the same size as a doubles badminton court and measures 20×44 feet. In pickleball, the same court is used for both singles and doubles play. The net height is 36 inches at the sidelines and 34 inches in the middle. The court is striped similar to a tennis court with right and left service courts and a 7-foot non-volley zone in front of the net (referred to as the “kitchen”). Courts can be constructed specifically for pickleball or they can be converted using existing tennis or badminton courts. 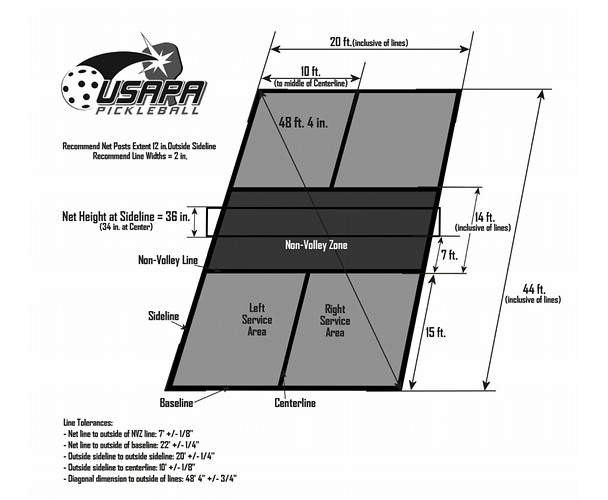 What are the Pickleball Court Dimensions?

Court measurements shall be made to the outside of the perimeter and non-volley zone lines. All lines should be 2 inches (5.08 cm) wide and the same color, clearly contrasting with the color of the playing surface.

The pickleball court lines are the same for both singles and doubles play (unlike tennis).

Pickleball’s small court size allows younger players or those with varying degrees of mobility to participate in a way that the larger court of tennis sometimes prohibits. But the other side of that is don’t let the smaller court size fool you. A singles match with equally skilled opponents can be one of the best and the most fun you’d have getting a competitive workout!

Note, there is a rule prohibiting volleying (hitting the ball in the air) in the non-volley zone(or the “kitchen”) which is the space 7 feet from the net. This very important rule helps to equalize play and reduce overpowering smashes at the net. This particular rule was one of the first from the founders in 1965 on Bainbridge Island. One of the bigger adults would love to just camp out at the net and wait for the putaway, and that had to be stopped! To learn more about this story and hundred others check out the one and only book on the history of pickleball, written by me! I am the historian of the game.

To play pickleball you need a paddle, pickleball ball, a pickleball net, and an opponent. Then Game On!

As of May 2020, there were 35 approved pickleball for both indoor and outdoor play.

Pickleball comes in several colors, including white, yellow, and green. The pickleball ball is sometimes incorrectly called a “WIFFLE Ball” which is trademarked and does not have a straight flight pattern. A pickleball is not a WIFFLE ball, it is a “pickleball” and because the two plastic balls with holes looks similar many get confused or misquote it. But once you hit with each, you instantly know you need a pickleball to play.

As of May 2020, there were 828 entries for either Pass or Fail quality of play and approval by the governing body of the sport - USAPA.
https://equipment.usapa.org/paddle-list/

How Many People Play Pickleball?

3.3 million players in the United States

Here are a few details from this 2019 SFIA Pickleball Participation Report:

What is Pickleball References:

https://www.usapa.org
History of Pickleball - More Than 50 Years of Fun!

Wow, I just gotta say @Lucore this post is a masterpiece. I love the videos that you have linked. I am going to be sending people to this post from now on in order to learn about the sport. It is amazing and a huge blessing in my life. Now it is explained in one place so well!! Thank you!

What an amazing article❤️ So eloquently worded and educational. Thanks @Lucore!!