What is the best Pickleball to play with, and why? ;) 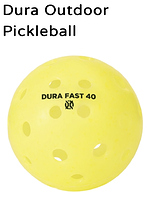 image828×972 253 KB
One of my favorite discussion topics is what kind of ball is best. Each ball that is made has its own unique personality and playing style. I think that is important to point out in this type of a conversation because certain balls will play better for certain types of playing styles.

From what I have been able to tell in playing with the Dura pickleball, it is much more difficult to control and requires more technique and finesse. All the other balls have some sort of give, and help the individual make the shot because it is easier to control.

What are your thoughts?

I like the Dura because you get a lot of “response” from it which is probably also why players find it more difficult to control than other balls. After Dura, I like the Franklin ball. Bit softer and maybe more durable.

I love the dura for warm weather play. I’d say the Franklin outdoor ball is better in colder weather they seem to break less then the dura and withstand wind a little better in my opinion. I am a ball snob 100% and prefer to play with a dura. It is way less forgiving then other balls. You make a mistake like a high drop or dink you’ll see it with the dura. The onix is soft and fluffy it has such a high bounce and is not a good put away ball. My thoughts.

Agreed I wish the dura was a little more durable and wish the Franklin didn’t soften so fast.

I know it’s unpopular but I absolutely love the Onix balls I love the bounce and that they’re harder to put away. I think it makes for longer rallies and a more satisfying smack on the paddle. I am pretty low level though so it could be an amateur love.

I am that way as well. I will often times bring a heater and put the balls next to it and switch them out after two points. It is annoying, but hey we get to play with a dura in the winter. We also don’t have snow in St George so we can afford that luxury.

I know it’s unpopular but I absolutely love the Onix balls I love the bounce and that they’re harder to put away. I think it makes for longer rallies and a more satisfying smack on the paddle. I am pretty low level though so it could be an amateur love.

It seems like lower level skilled players tend to love the Onix balls. I am sponsored by Onix and I love what they do. They allow for different levels to be able to play together, which if that is what the goal Is than they are perfect for that. If you are competitive and want to show you are better, bring out a dura.

St George is the place to be wish I was still living there I have to deal with winter months and indoor play and indoor balls and there is no good indoor ball just saying.

Before I knew much of anything about balls, I had been playing with a dura in the morning and I went to a different location in the afternoon, where they were playing with an indoor ball on an outdoor court (it happens lol).

The first drop I hit bounced right around the kitchen line. ON MY SIDE! lmao! The response of my paddle was so very different and it took a little while for me to adjust. You have to hit it a lot harder to get it to go somewhere.

I can see why an indoor ONIX type ball is preferred at lower level play. The ball slows down a lot after the bounce so you have more time to deal with the shot which leads to more control and longer rallies.

I personally like Franklin X balls the best. I think it is the most balanced ball in terms of speed and control. However, I really do think we need to consolidate the quality and standard of the balls to be taken more seriously as a sport. Playing between different balls feels like playing a different sport. At least IMHO. The difference between Onix, Dura, Franklin etc is just too much in terms of how they play. I feel that it really requires you to almost change your game altogether between different balls. I wish there is more standardization.

2 posts were split to a new topic: Musings about a definitive “best” pickleball

IDK which ball is the better ball. I know what I prefer. I started playing 6 or so years ago. At that time the Dura was the only ball we knew. Along came the Onix Pure2 and everyone started bringing it to the park. It was good and easier to play with but after maybe a year of playing with them we noticed how hard it was to put away. Good players returned everything and poor players became better players. The problem became obvious when good players were making great 3rd shot drops and poor players were able to wait for it to bounce up as that ball does and whack it. It didn’t represent a skilled players ability and less skilled players thought they were better than they actually were. One pro commented that 3.5 players were now hitting shots like they were 5.0. Anyway, Franklin then came along and now there was a middle ground ball. For me personally I like the fast pace play outdoors with a Dura or Franklin. Is the Dura/franklin the better ball? They are for me.

I like your breakdown of why you love the Dura and Franklin.

Playing between different balls feels like playing a different sport.

I also love what Ty noted. It’s crazy how playing with a different type of ball can create a completely different game experience!

I just can’t wait to get back on the courts and play with ANY kind of ball, at this point in time!!!

Did they take down the nets where you live Ty, or are they giving you the freedom to make your own safe social distancing choices?

Yes 100 I believe this to be true for myself also & why I prefer it over any other ball I’ll play with the dura or franklin because it is less forgiving on the bounce. Thanks for wording it so well.

I live in northern Florida and personally prefer the Franklin. I will say I have never played with a Dura. but I have played with just about everything else. our club plays with Onix as they last longer and I’m fine with them, but first chance I get the Franklin gets swapped in. Especially when we get a more advanced group of players.

I live in northern Florida and personally prefer the Franklin

I appreciate that information because i was supposed to play in the US Open and was worried about how the franklin would play. It’s a lighter ball, but a good one for sure. I’m a fan of the dura and the pace it brings.

@PickleballPhil have you or is there anyone here that has used the Onix generation of the Dura? I heard some talk they were making small but significant improvements?