Pickleball gave me a 2nd chance after cancer

I was born the same year as Pickleball. I didn’t know that until I started playing it in 2018 though. I played many sports while growing up. I was on bowling leagues from the time I was 9 until my mid 40’s, softball from age 9 until a few years ago (and still play when our church gets together to play), recreational tennis (I was just an average player), and ran my first half marathon at age 40, and my last one at about 50. I played softball, basketball, and track all 4 years in high school. So I have always been competitive and active. I have always loved sports, but nothing compares to what Pickleball has given me.

I was a fitness instructor and personal trainer, and I jokingly told people I got paid to be healthy,. Then on December 5, 2016 I was diagnosed with Stage 3 endometrioid adenocarcinoma (uterine cancer). It was a shock. I didn’t meet any of the risk factors (not overweight, not diabetic) except 1, never having children. (We later found out I have lynch syndrome, which is a genetic mutation, caused by one of my parents. I have no way to tell which side of the family it came from, because they both died before I graduated high school, so I can’t ask them). Anyway, I had surgery, followed by chemotherapy, and radiation. Finishing my treatments June 20, 2017.

I was able to start teaching my fitness classes again in September of 2017. When I did, I saw some of my tennis friends in the Y gym playing Pickleball. I didn’t start playing right away though. I still had a port from my treatments, and didn’t feel like I could play Tennis, and wasn’t sure about Pickleball, but the smaller paddle looked like something I could handle. I had seen the game one other time, but really didn’t understand it. This time I decided to look things up on youtube. I read about the rules, watched how to play, and decided to give it a shot in February 2018. I started with a group of older ladies that played on Tuesday and Thursday mornings. After about 2 weeks with them, I played with the next group that played on M/W/F (mostly guys) Then I would also play off and on with some of then night group (my tennis friends). Everyone was so welcoming. How could I not like it? Sports, friends, it was wonderful!

In April of 2018, just 2 months after I started playing, I played my first fun tournament at our Y and won! Ok, the reason was it was a “draw for your partner” where they paired up a good player with the newer players. I got the best player at our Y, so we won! 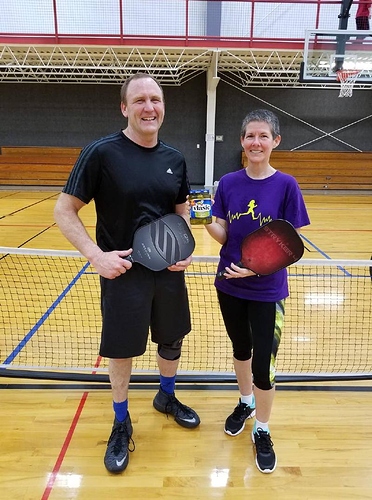 In June of 2018 I played in the Missouri Show Me State games in Pickleball. It was bad. My partners and I hadn’t been playing very long and had to play 5.0 people in our age groups. Needless to say, we lost. However, I was not about to give up! I loved this sport, and the competition. God had brought me through cancer, and given me good health to enjoy a new sport. I call it my second chance at life, and second chance as an athlete.

Last year I went back to the Show Me State games and played singles in the 3.0, and this time I didn’t lose a match and took gold. No more 3.0 for me!

I played in my first sanctioned tournament in Branson, MO in the fall of 2019. I took silver in the 3.5 women’s singles (and somehow my rating is a 4.0 in singles now!) I learned about the opportunity bracket in that tournament

My husband started playing about 6 months after me, so when we go out of town we like to play pickleball. We played in Columbia, MO (an hour south of us) in 2019 and I met some wonderful people there, and found a couple really great ladies to play doubles with (Alison and Kate). Alison and I have played in 3 local tournaments and won 2nd twice and 3rd once. Kate and I played in a fund raiser and won it! Granted, it was during the day when the better players might be working instead, but still…it was a win. Unfortunately for me, Alison is moving back to California, so I lose her as a partner. Kate has knee problems, so has been out all year too. When we are able to play again, I am hoping she is better and can play! If not, I hope God sends me another partner with as good of an attitude and personality as these ladies have.

Pickleball brings new friends. It brings back the competitive feeling in athletes, no matter the age. God can use pickleball to give 2nd chances.

Thank you so much for sharing this story! When I saw your post over on the introductions thread, I thought… I’m gonna like this gal! I’m so glad you shared your deeper pickleball story!

My story is quite different, but the one thing we have in common is how this incredible sport has reconnected us with people, and fitness, and progression.

I’m 39 years old and love how I can be playing with some 18-year-olds one minute, and then some of my 60 and 70-year-old friends another minute, and have just as good of a time!

Congrats on winning that first tournament!

When I started it with my buddy Dan, we signed up for The first tournament we found, and we were terrible! We would pick up about two or three points per game that we played.

it got to the point where we would have a goal to score at least five points!

and we were so proud when we did!

Since then I’ve been able to bring home a couple metals from other tournaments, but never a gold!

Anyway… I think your story is incredible and it’s so exciting that pickleball has been something that has brought you a new life!

Thank you so much! I read your story as well and knew you are a great guy

Pickleball is the only sport I can think of that people from different generations can play together. We have had many parents and kids play, as well as Grandparents and Grandkids together at our Y. It is so wonderful to see! I hope they all come back when it is safe to play again. I am glad for this forum to meet new people and talk about pickleball. It makes missing it a little easier.

Way to go Sandy! Never give up!

Thank you very much! I appreciate it